And so ends the Samara’s Peril blog tour. This was my largest tour yet! Thank you so much to everyone who participated! I was in total panic mode just before it started, but it thankfully went very smoothly. Minus the paperback of Samara’s Peril not being ready in time. But good news! It’s available now!

If you missed any of the tour, here’s a recap. I also have a little surprise at the end of the post as well the winner of the giveaway!

“Oh my goodness.  THIS WAS SO GOOD.” – Mickayla at Pencils Can Change the World

“From the first chapter, Jaye L. Knight sets the stage for a complex and involved plotline that takes us through some of the darkest and brightest times in Jace’s life so far.” – Erika at Written Rest

“I can't say enough how much I love this series.” – Jack at However Improbable

“This book blew me away with all that was revealed.” – Gabrielle at Gabrielle-Soli Deo Gloria

“The bottom line is: the storytelling is amazing, the story itself is meaningful, and the characters will make a home in your heart and never leave.” – Leah at Leah's Bookshelf

“This book was absolutely incredible. So many things about it were just… *squeals giddily*” – Ivy Rose at Lakeside Publications

“So where do I begin?  So much happened in Samara's Peril, a lot of good things that many readers of the Ilyon Chronicles have been hoping for.” - Soliel at Reviews by Soleil

“The author surprised me in how she ended it, but the ending also seemed to work particularly well.” – Athelas at Red Lettering

“Full of the action, development, plot and faith inspired struggles as it's predecessors, I dare say this might be the best installment yet!” - Therru Ghibli at Sutori no Hana

“If I had to describe this book in one word, it would be ‘powerful‘, especially emotionally.” – Melody at Melody Jackson, Author

“I fell in love with this story from the get go! The characters are wonderful and I love the depth of the message of God's love.” – Amanda at Inklings and Notions

“This book is probably my favorite in the whole series.” – Hannah at My Bookcase and I

“As fantasy, this is a delightful story. As Christian fantasy, it is exceptional.” – David at Reality Calling

“I have read all of Jaye’s books thus far and this one is by far my favorite as each character matures even further.” - Faith at Writings, Ramblings, and Reflections

“I don’t know if I can convey to you how great this book, this series, is.” – Gabriela at A Heart Redeemed

“This book seemed to be basically Jace’s book. Which. I. loved.” – Alyssa at Reading Anyone

“Not only was her writing style first class, but the faith themes were some of the strongest I've found in a fictional work. Samara's Peril is no exception.” – Kenzi at Honey Rock Hills

“Each book in Ilyon just gets better. I loved this book, every bit of it.” – Morgan at Shire Reviews

“Oh my word. After finishing the last page on that fateful night, I literally sat on my bed: mind blown. The twists, the development, and emotions were immaculate.” – Jazy at Thriving Hope

“The plot is a good mix of every element that makes a passionate and resonating story aimed at surpassing the need to simply entertain, but to pass on a message of hope and courage at a time when this generation of God’s children needs it.” – Miranda at To Be A Person

“How to describe this tale? Heart-rending, yet beautiful. Poignant and soul-stirring. Intense. Humorous and endearing. Incredibly sweet. Emotional. So many moments for our beloved characters!” – Shantelle at A Writer's Heart

“I’m not sure how it’s possible, but these five-star books keep getting better with every installment.” – Amanda at Scattered Journal Pages

“However...there were some amazing things that happened and gave me chills.  Seriously.” – Alea at Elvish Pens, Fantastical Writings

“It’s the Ilyon Chronicles! Of course I spent most of this book as a puddle of fangirl mushiness!” - Tricia Mingerink

“The ending to this one had me worried for a few pages, but I was very pleased with where it left off. There’s a promise of some more great action in the next installment.” – RM Lutz at The Book Hound

“And let me say up front: If you're not reading this series, what are you doing with your life????” – Kendra at O. Scarlett! Reviews

“At last I got to read book three of the Ilyon Chronicles, Samara's Peril! The book was wonderful, just as the other two are!” – Natasha at Looking Through My Lens

“I would highly recommend this book to those who enjoy NA Christian fantasy.” – Emily at Zerina Blossom's Books

“This book is probably my favorite in the series. If you realized how much I love the previous two, then you’d realize that that’s saying a lot.” – Hope at The Warrior and the Writer

“Samara's Peril is excellently written as all Jaye's books are. She continues to tell a story of amazing faith through trials. But the struggles that are faced are not ignored either.” – Anna at Thoughts of Anna S. Brie 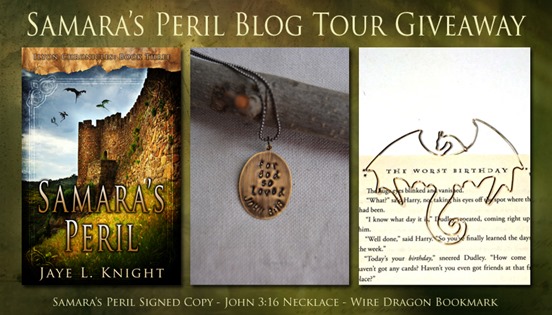 The winner of the SP giveaway choosen randomly by Rafflecopter is . . .  Mikayla!Congratulations, Mikayla! I’ve sent you an email to get your address so I can ship your prize.

And for everyone who didn’t win this giveaway, you can still enter to win one of 2 autographed copies of SP over at Goodreads!

On to the second half of the series!

Samara’s Peril marked the halfway point of Ilyon Chronicles. Now I get to delve into preparing the beginning of the second half of the series for release! Many of you probably already saw it at the end of Samara’s Peril, but it’s always exciting to “officially” announce the title for the next book at the end of these blog tours. So, without further ado, the title of book 4 is… 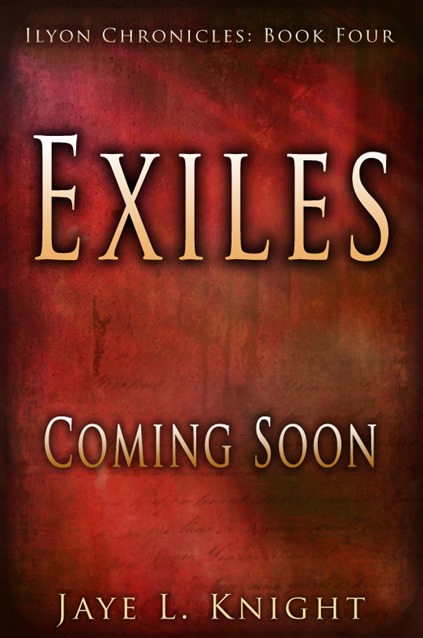 Exiled from his homeland, King Balen leads a group to Dorland in search of aid against the emperor, while those in Landale must tread carefully as their enemies close in around them. In Valcré, Prince Daniel has his own challenges to face in the midst of his father’s tyranny.

Exiles happens to be my darling and may just be my favorite of the series (I won’t know for sure unitl I finish writing book 6). It was such a difficult book to write because I was so unhappy with it most of the time, but that somehow completely changed once I finished it. It also may be the longest book of the series. SO MUCH HAPPENS. I can’t wait to share it! For a sneak peek at a little bit of my inspiration for the book, head over and check out the new Pinterest board. ;)

Also, don’t forget that the 2016 Ilyon Chronicles Fan Art Contest is going on right now! You have until June 15th to send me your submissions.