Holiday Sales and a Pre-Order

It's that time of year again when sales abound. Today is particularly exciting because, not only do I have sales to offer, but the Daican's Heir Kindle book is up for pre-order! (Unfortunately, Amazon still doesn't allow indie authors to set paperbacks for pre-order.) This is extremely exciting for me. After all the many years I've worked on this book, I can hardly believe it is now there on Amazon. Ahhh! Now, don't panic when you see the release date set for all the way next fall. That is simply to give myself peace of mind and a ton of wiggle room. Right now, I'm very confident it will have an early 2023 release, and I'll update it as soon as I know for certain. The pre-order is also on sale for the next few days and will go up to $3.99 after Monday.
I also put every one of my other Ilyon books on sale for 99¢ each! This is the first time they have all been that low, and if you haven't started the series or haven't gotten through all the books, now is the time to grab them in preparation for the release of Daican's Heir! 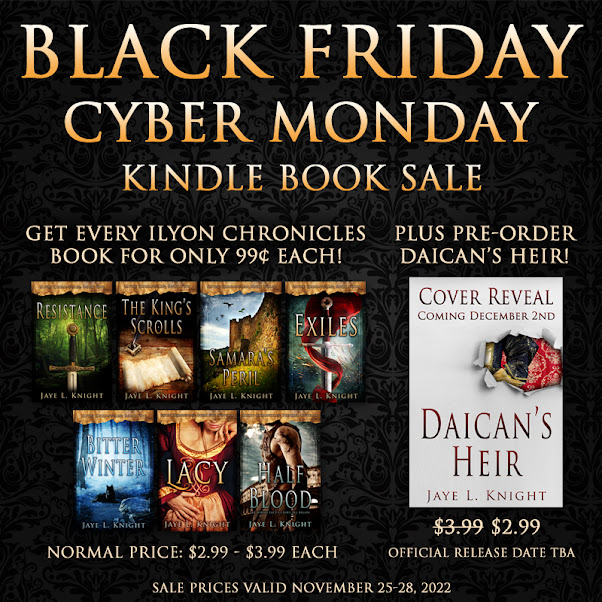 99¢ Ilyon Books
Pre-order Daican's Heir
Of course, I also have sales on my shop website and Etsy (this is how I actually make my living). All clothing and accessories are 15% off through the weekend and Monday. Unfortunately, this doesn't include the paperbacks of my books. Since I already offer free shipping on everything, I can't discount them or I'd lose money. *sigh* But all Ilyon Chronicles shirts and other fun merch are included in the sale! My shop has items for nerds, book lovers, writers, Christians, and kids and babies! Just about everything is on my personal shop website (plus some things not found anywhere else), but if you'd prefer to shop on Etsy, I'll include the links to my shops there as well. 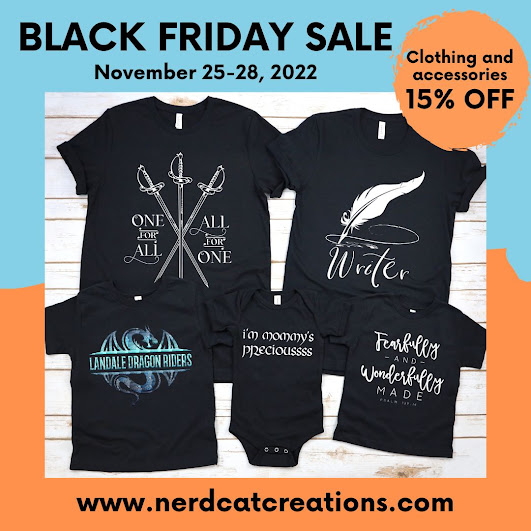 Main Shop
Nerd Cat Etsy
Nerd Kitten Etsy
Writer Etsy
If you've already read all of my books and are looking for something new to read, make sure to check out this huge book sale for clean fiction! Every single book is under $1. You can't go wrong with that. (This is also your subtle nudge to check out Elven Alliance by Tara Grayce if you haven't already. One of my favorite series EVER.) 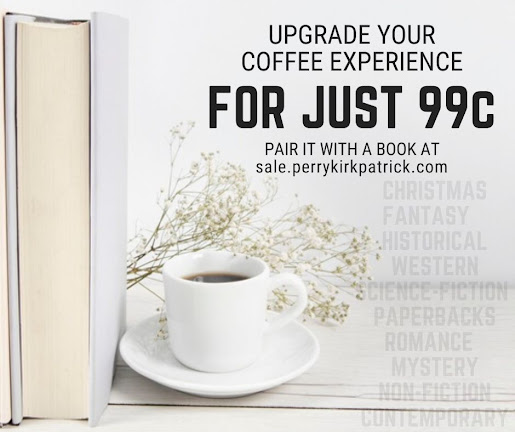 Book Sale
Posted by Jaye L. Knight at 6:00 AM No comments:

Did someone say cover reveal?

Hello, everyone! I know my blog has been a virtual ghost town for the past year, but there are some exciting things coming up! If you follow me on social media or got my newsletter this morning, you will have seen that I finished the final major edit of Daican's Heir earlier this month! It was a massive undertaking I pretty much dedicated every waking moment to for almost two and a half months. The result is a massive 151,000 word finale to Ilyon Chronicles. I am SO excited to share it with the world! While I don't have a release date just yet, I do have a cover reveal set for December 2nd! If you would like to take part in the reveal and share it on your blog, social media, email, or wherever online venue you like to frequent, you can sign up HERE. And to celebrate this milestone, you can read the official blurb, as well as a fun little sneak peek, below. 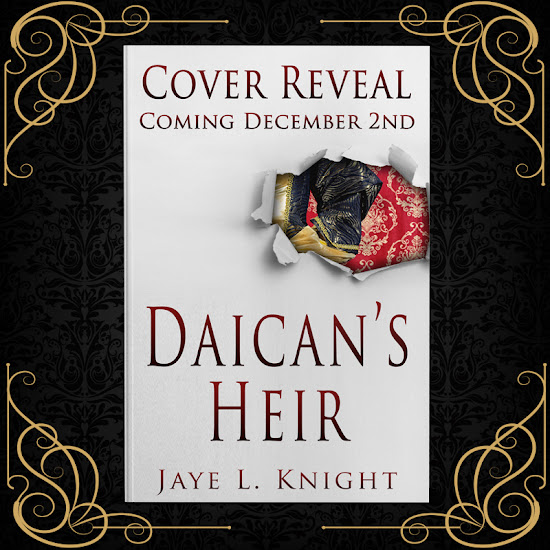 For three years, the Resistance has suffered under oppression—first from Emperor Daican, and now from his daughter. In her quest for vengeance, Davira has ripped Arcacia apart, and more blood is spilled every day. Newly married, all Jace and Kyrin want is to be able to live their lives in peace. In order to do that, they must help restore the rightful heir to Arcacia’s throne.

Carrying the weight of everyone’s hopes for the future, Daniel works every day to be the leader and king they have all fought so hard to see him become. With the Resistance and their allies from all across Ilyon united behind him, he prepares for a final confrontation with Davira. But to do so will require facing the full might of Arcacia’s military and Davira’s wrath.

When Jace and Kyrin become the primary targets of her ravenous hatred, Daniel finds himself in a race against time to stop his sister and avoid the bloodbath she is determined to unleash. Can he find a way to protect his loved ones and bring peace to Ilyon or will Davira succeed in bringing them all to their knees and destroying everything they hold dear?

Talas eyed Kaden up and down, probably looking for more injuries. A smirk lifted his lips. “Looks like you lost a bit of hair on that one.”

Kaden brushed his hand through his hair. Ashy residue dusted his fingers, and he did now catch an acrid whiff of burnt hair along with his singed clothing. At least he didn’t find any bald patches, and his scalp didn’t feel burned. His hair needed a trim anyway. Maybe Marcus could give him one later. The militiamen were good at keeping up their appearances.

He ran his knuckles over short whiskers along his jaw. None of them seemed to be missing. “At least the beard is still there.”

“You humans and your beards.”

Kaden snorted. Cretes might not grow facial hair, but they had their own vanities. “Says the one with hair halfway down his back. I bet it takes you longer to wash it than it takes me to keep my beard trimmed.”