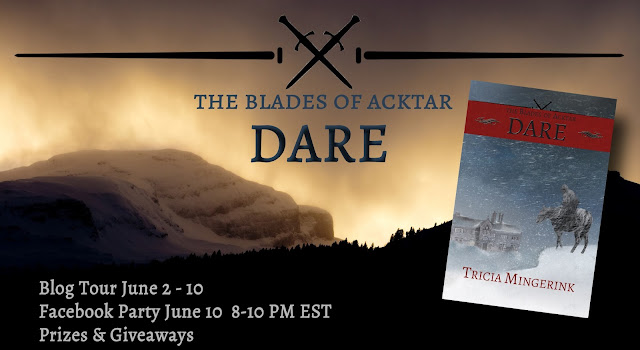 Today I’m excited to be participating in the blog tour for Tricia Mingerink's debut novel, Dare! Tricia has taken part in my tours, so I'm very glad to return the favor as she enters the exciting world of publishing! As part of the fun, I have an interview I did with Tricia. But first, a bit about the book! 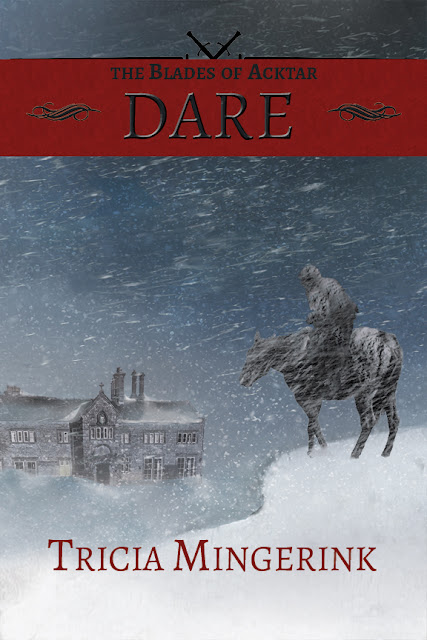 Courage could cost him everything.

Third Blade Leith Torren never questions his orders or his loyalty to King Respen until an arrow wound and a prairie blizzard drive him to the doorstep of the girls whose family he once destroyed.

Their forbidden faith and ties to the Resistance could devastate their family a second time.

Survival depends on obedience, but freedom beckons. How far does he dare go to resist the king and his Blades?

No matter what Leith chooses, one thing is certain.

The very first story I ever wrote was done with crayon pictures in a spiral notebook. It followed the life of a talking horse named Jipsy. I dictated the words to the story to my mom (since I was two and couldn't write yet). I have a very clear memory of her correcting my English to "The tiger is teasing Jipsy" and me getting mad and insisting that it had to be "Tiger teasing Jipsy." I eventually filled 6 70-page notebooks with stories about Jipsy, and that horse did everything from go to church to have a stalagmite form on her back while walking through a cave (written after my family visited the Meramec Caverns when I was six).

Leith, though he has many struggles and darkness that I don't. I'm introvert and I struggle with a fear of failure. But I also see a bit of myself in Renna. I tend to worry too much.

During 9th grade, my best friend and I wrote a book together in the form of letters written back and forth between our characters. We spent a lot of that 9th grade year giggling over letters before class (how we didn't get in trouble for this, I don't know) and debating whether or not I actually killed off a character. I'm surprised no one took us aside for intervention after overhearing our debates. My Friend: "He's not dead. You don't kill your characters." Me: "Of course he's dead! They found his skeleton!" We weren't your typical 9th graders.

Tough one. I'm something of a history buff, so I'd love to meet a lot of them. C.S. Lewis, Laura Ingalls Wilder, J.R.R. Tolkien to name a few. If I had to pick a non-literary historical figure, I'd pick Davy Crockett. I'd love to hike in the woods with him and pick up a few tips about hunting, walking quietly, and the outdoors.

Coffee or tea? Neither. I'm a Mountain Dew girl.

Pizza or pasta? Both. I love my Mom's homemade pizza, and I love pasta, probably because pasta is one of the few foods I can make. 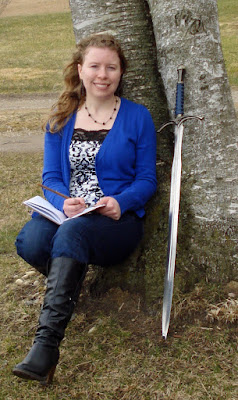 Tricia Mingerink is a twenty-something, book-loving, horse-riding country girl. She lives in Michigan with her family and their pack of pets. When she isn't writing, she can be found pursing backwoods adventures across the country. 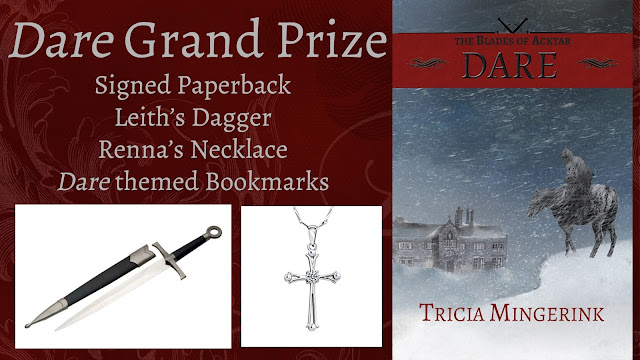 Giveaway!
Enter to win a Grand Prize giveaway to celebrate the release of Dare! Prize includes an autographed paperback of Dare, a necklace like the one Renna has in the book with a sterling silver cross pendant, a medieval dagger (not sharp) like the one Leith carries, and Dare-themed bookmarks! (Due to the difficulties in shipping weapons across international borders, this giveaway is open to US residents only). The winner of the giveaway will be announce at the end of the Facebook party on June 10.