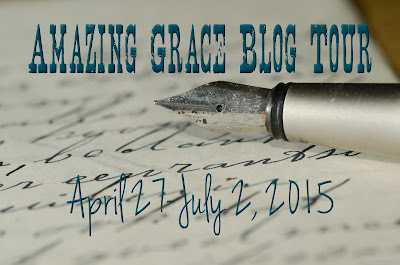 Here I am with another character spotlight! This one is for a character in my friend Faith Blum's new book, Amazing Grace. I had the privilege of beta reading this book, and I always enjoy her sweet stories. Now, before I get to the character spotlight, here's a little about the book. 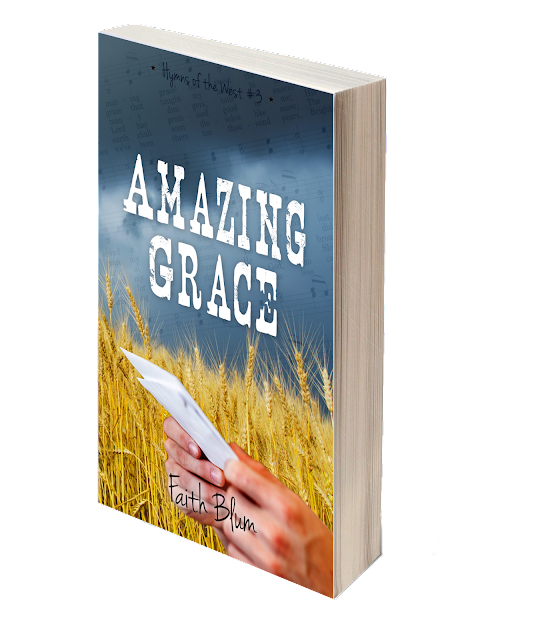 Caleb hurried to the post office. He had to get in and out before his sister finished at the general store. “Any mail for the Stuarts?” he asked the postmaster.
The postmaster took a lazy look at him over the top of his eyeglasses and gave a heaving sigh as he turned around to check. “Yep. Somethin’ from Ohio and somethin’ from Montana.”
Tapping his foot, Caleb waited until the large man put the letters lazily in his hand. As he left he wondered why Anna had written someone in Montana and who she knew in Montana. It was really none of his business, but he was still curious. He folded the Ohio letter in half and stashed it in his back pocket. It would get wrinkled, but at least Anna wouldn’t know about it.

As Caleb struggles through some inner battles, he secretly starts a correspondence with a widow and her daughter. Their unabashed faith in God convicts him and increases his inner struggles.

Unable to find a steady job, Maggie places an advertisement to become a mail-order bride. Her daughter, Rachel, is her motivation and encouragement, but if Maggie doesn’t find a job or husband soon, Rachel might not survive through the next year.

Can Caleb learn to trust God despite his past? Can Maggie and Rachel hold onto their faith despite all their trials? What will happen when they meet in person?

Name: Maggie McDougall
Age: 30 years old
Appearance: Thick brown hair, brown eyes, and above average height
History: Maggie was widowed when she was twenty-eight. Her husband died when he fell from a roof onto his back. For two years, Maggie struggled to support herself and her daughter, now ten years old. Out of desperation, and pleading for God’s leading, Maggie advertises as a mail order bride.

Author’s Notes: Maggie was actually a challenging character to write. She is complicated and private. There were many times when it was hard to get into her head to know what she was thinking. But then there were other times when she opened up completely.

I think part of the problem I had was that Maggie is so different from me. She’s been married, she has a daughter, and she has been through so much tragedy in her life. Both her parents and her husband’s parents are dead, and she lost her husband. But through it all, she taught me how to graciously be content in all circumstances and prayerfully submit to God.

Here’s a somewhat long excerpt to give you a little hint of what Maggie is like:

Maggie trudged home after another long day looking for a decent job to do and failing again. It would be another supper of thin cabbage soup for them tonight. God, Maggie prayed, please help me provide for my daughter. She’s getting too thin. If we don’t get some decent food, she’ll grow up to be motherless and probably end up working in a brothel or dying of starvation. Please, I beg of You, give me something. Some kind of hope to help me get through this. I can’t handle it much longer.

She took a deep breath to steady her anguish before turning the doorknob to enter the apartment.

A smile flirted with Maggie’s mouth despite the exhaustion seeping through her bones. “I suppose you would like me to read them?”

Maggie smiled tiredly. “Okay, why don’t you make us some soup while I read the letters?”

Rachel bounced into the kitchen and started to cut up the cabbage with a vengeance. Maggie sank into the only upholstered furniture in the room—the upright chair Duncan had given her as an anniversary present.

Please God, don’t let these three men be as demanding or desperate as the last two letters.

Dear Maggie,
It warmed my heart to read your advertisement. I need the help of a woman to raise my two nieces and two nephews. They are all younger than your daughter and adding your daughter in the mix, there would be children ages 10, 8, 6, 4, and 2. A bit hectic, I know. I’ve been trying to care for the four children with very little help since my sister and her husband died a week ago.

I am a God-fearing 38 year old man who has never been married. I am the owner of a ranch in Kansas. The ranch does quite well and I am rarely needed to help with the stock. That is the only thing that has helped me and the housekeeper stay sane with my nieces and nephews around. I do have a housekeeper and would be able to support a rather large family. Come to think of it, I already do.

I have blond hair and green eyes, I’m somewhere under six foot, have an average education, and was raised on this ranch. As the oldest son in a family of two sons and one daughter, I inherited the ranch. As I mentioned before, my sister and her husband died in a horrific accident. My brother is off wandering the Wild West somewhere. I lost track of him years ago.

I don’t think there’s anything more you need to know. If there is, ask and I’ll try to give you an answer.

If you don’t mind me asking, how long have you been widowed? Would your daughter be okay with having four instant siblings?
Anxiously awaiting your response,Cole Baxter

Maggie leaned her head back and stared at the ceiling. Yes, this man was a little desperate, but he had four good reasons to be. It would definitely be a big change. Maggie set the letter aside to read to Rachel later in the evening. The next letter had just a few lines on it and most of the words were barely legible, so she set it aside to be burned in the wood stove during supper.

The third letter tugged at her more than the first. She closed her eyes as she thought about it. She couldn’t figure out why this letter would affect her when the first one should have been the one to really make her want to jump up and go help the poor man. But the second one had an air of longing, and a desire to reach out to this man filled her…

“Mum?” Rachel’s quiet whisper woke her from her thoughts.

“You weren’t asleep, were you?”

“No, Dear. I was just thinking. Is supper ready?”

Maggie rose from the chair and stretched. “Here, burn this letter. We can read the other two while we eat.”

A grin spread over Rachel’s face with the rapidity of a flash flood. “Really?”

Rachel spun around and raced for the kitchen. “It’s already dished up and ready to eat, Mum,” she called from the table.

Maggie took two steps and stopped in the kitchen doorway. There was a tablecloth and two unlit candles between the two china bowls. Rachel must have found some wildflowers somewhere because there was a cup of flowers on the table and a small dogwood violet in each bowl of soup as a garnish. Maggie’s hand went to her mouth as a gasp of pleasure and surprise escaped her mouth.

Rachel’s shy smile told her she had planned this as soon as she got the letters. “Do you like it?”

Maggie took a quick step toward her daughter and enveloped her in a big hug. “I love it, Baby Girl. I absolutely love it.” She let go of Rachel and stepped back, tears still in her eyes. “Now let’s eat before the soup gets any colder.”
* * *
About the Author 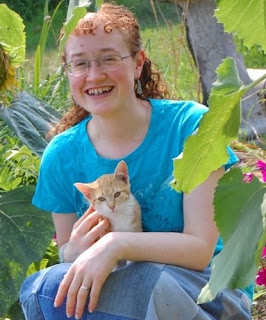 An avid reader, Faith Blum started writing at an early age. Whether it was a story about the camping trip that summer or a more creative story about fictional characters, she has always enjoyed writing. When not writing, Miss Blum enjoys reading, crafting, playing piano, Captaining on the Holy Worlds Historical Fiction Forum and playing games with her family (canasta, anyone?).
As a history enthusiast who has been fascinated for years with the Old West, Faith has endeavored to create a clean, fun, and challenging Western story. Faith lives with her family on a hobby farm in the Northern Midwest, where she enjoys the many cats they have.
You can find Faith on her Website, Blog, Facebook, and Twitter