The Wildcat of Braeton—Blog Tour + Giveaway! 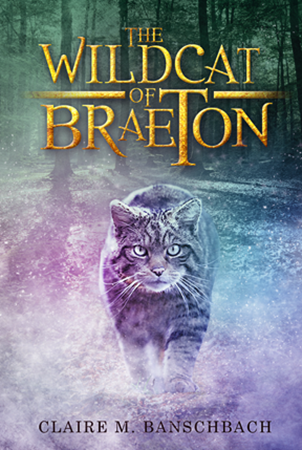 This happens to be the week of blog tours, or at least it feels like it. I have a blog tour post both today and tomorrow. :) Blog tours are always great fun. Today I have the pleasure of sharing an interview with author Claire M. Banschbach celebrating her newest book, The Wildcat of Braeton! You may remember I helped share in the cover reveal a little while back. Before we get on to the interview, here is a bit about the book.

A little note from Claire regarding the release of the book:

Due to circumstances beyond my control, the release date has been moved to (most likely) May. However, if you feel that you cannot live without this book, you can buy it here- https://www.tatepublishing.com/bookstore/book.php?w=978-1-68097-981-7 Warning- it costs about a hundred-million dollars (or I’m a poor college student and anything over $20 is expensive), so I would wait until its official release date and you can shop more cheaply! Stay tuned on my Facebook page or blog for more info on the release date!

1. What inspired you to write The Rise of Aredor and The Wildcat of Braeton?

I think seeing the Lord of the Rings movies in the theaters really jumpstarted my imagination to start creating worlds. It was shortly after seeing those movies that I began to do some writing. It was truly terrible. But I always kept the story idea in my head and a few years ago started writing The Rise of Aredor. The Wildcat of Braeton picks up a year after RoA and follows my sister’s favorite character. So you could say she inspired the second one with her incessant hounding for his story.

2. Where would we be without LOTR? I was writing before that, but I probably wouldn’t have started writing fantasy if not for those movies. :)Now, which of your characters would you most love to spend the day with?

I would love to spend the day with Kara and Kieran, the twins from Braeton. They’re both basically my age and they love horses and could teach me a few riding tricks.

I’d have to say the same! I love it when characters stop and tell me little fun facts about themselves, or when a completely new and awesome character just shoves his or her way into the story and it really takes off from there. I think it’s almost easier to take a character and what you know about them and then backtrack to find out where they came from and what their home might look like.

Editing! I go from being really excited about the story to never wanting to see it again! But it’s really hard to let some parts go or convince myself that other parts actually really need to be rewritten. It’s a long process that I wish didn’t have to happen. Haha!

One of my current works in progress is titled “The Mountain Baron” - The man known as the Mountain Baron turned his back on the world after it turned on him. Branded a traitor and accused of killing the prince, he takes to mountains and builds a stronghold of outlaws and outcasts. He believes in nothing but the justice he was refused. He wants nothing more to do with his God, Alsaya, or his Clan. But when word reaches him that a lord has seized his brother, a Seer of Clan MacDuffy, he rides from the mountains. That would be the lord's last mistake. MacDuffys look after their own.

As far as publishing? I might prepare my short sci-fi for publication next.

Does studying count? Haha! I love reading, horseback riding, and playing sand volleyball. I don’t get to the gym often enough for it to be a hobby. I also love watching movies!

Shadow Hawk by Andre Norton, Triss by Brian Jacques, The Horse and His Boy by C.S. Lewis, I don’t think I can pick a favorite from the LOTR trilogy, Cinderella and the Colonel by K.M. Shea, and I’ll give you a shoutout here because I really really really love Resistance!

1- This I recently discovered about myself- I don’t like putting butter on my bread.

2- Gladiator is my favorite movie

3- Even though I live in the great state of Texas, I do not like Dr. Pepper. It’s much too sweet for me. I am a Coca Cola drinker.

10. Gladiator! I LOVE Gladiator too. :D But anyway, final question. What advice would you give other authors seeking to publish?

I would say to keep writing. Step out of your comfort zone and get other people to look at your work. Realize that you will get good feedback and bad feedback but it will prepare you for editing. Be able to stay true to your story and the reasons you wrote it. Treat everything as a learning process. I have two books out and I still have so much to learn about writing, publishing, marketing, etc.!

To see the rest of the awesome stops on the tour, make sure you check out the schedule here!

And now for a giveaway (because what kind of tour would it be without one, right? ;)

Opens at midnight March 23 and closes at midnight on March 28. Giveaway includes 2 signed copies of The Wildcat of Braeton and accompanying sets of four notecard sized illustrations from the series!