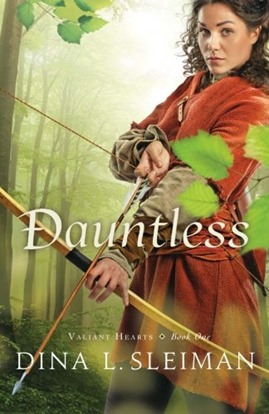 Where Legend and History Collide, One Young Woman Will Fight for the Innocent

Born a baron's daughter, Lady Merry Ellison is now an enemy of the throne after her father's failed assassination attempt upon the king. Bold and uniquely skilled, she is willing to go to any lengths to protect the orphaned children of her former village--a group that becomes known as "The Ghosts of Farthingale Forest." Merry finds her charge more difficult as their growing notoriety brings increasing trouble their way.

Timothy Grey, ninth child of the Baron of Greyham, longs to perform some feat so legendary that he will rise from obscurity and earn a title of his own. When the Ghosts of Farthingale Forest are spotted in Wyndeshire, where he serves as assistant to the local earl, he might have found his chance. But when he comes face-to-face with the leader of the thieves, he's forced to reexamine everything he's known.

I hate writing reviews to begin with, but it’s especially hard if it’s not a book I can gush over. Dauntless wasn’t one of my favorite books, which is somewhat surprising since I love anything like Robin Hood. But I will say this is very much just how the story hit me personally and not how it was written. I think what threw me off in the beginning was that the way in which the young men in Merry’s group were introduced left me initially thinking they were much younger than they were. This got really awkward when one of them turned out to be Merry’s age and was part of the book’s love triangle. It was hard to erase my initial idea of him as a young teen. Beyond that, I just couldn’t picture the scenes as clearly as I’d like. Through most of it, I just didn’t feel like I was IN the story.

One other thing that just felt off to me was the romance. Now, anyone who really knows me knows that I am a hopeless romantic. I love a good romantic story, but there was just something about this I didn’t really care for. I think it was so much mention of the physical attraction. Physical attraction IS a part of romance. It’s not what it should be based on, but it’s still part of it, so I don’t have a problem with it as long as it’s done tastefully (which I’m not saying Dauntless isn’t), but I think it was just a little too prominent. It felt like it needed something more to balance it out. (I know, that’s so vague and helpful. :P)

All that said, I found myself quite enjoying the last quarter of the book. I finally felt like I was really in it, and I thought it had a great ending. And even though I didn’t love Merry (I almost never love the female protagonist, so that’s no surprise), I loved most of the supporting characters, especially little Wren. She was adorable. :)

As I said, this is just how I felt personally while reading it. With everything I have going on, parts of it probably just hit me wrong that won’t bother anyone else. I’ve seen many five star reviews of this book, so if you like Robin Hood and medieval fiction, by all means, check it out. Just because it wasn’t my favorite doesn’t mean you won’t love it.