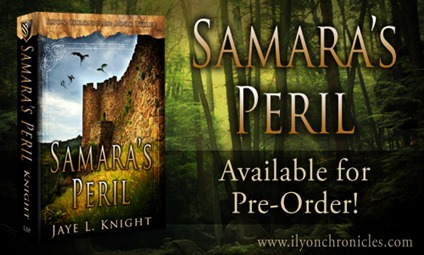 When news arrives that Emperor Daican has been in contact with his chief war strategist, it signals potential doom for the country of Samara. Determined to intervene, the resistance in Landale, headed by Lady Anne, embark on a covert mission in hopes of unearthing further information. However, a shocking discovery leads to complications no one could have foreseen.

Armed with their newfound knowledge, they set out for Samara to warn the king. War is inevitable, and they must face two desperate battles—one on the walls of Samara’s great stronghold, and the other on the battlefield of Jace’s heart, where victory might only be achievable through great sacrifice.

Yes, yes, it’s true! Samara’s Peril is showing up for pre-order on all major eBook retailers! :D I’m so excited to see my next “baby” officially on a retail site. *warm fuzzies* It’s kind of scary too, because now I have to have it ready by May 13th. Thankfully, (and I shouldn’t even say this), editing is going swimmingly so far. Despite the amount of notes I recieved from my beta readers, it’s all flowing together very nicely, in my opinion. I’m sure I’ll hit a few snags, but if it’s nothing too major, I’ll probably finish well ahead of schedule, which will be nice. That will just give me more time to work on formatting the book and planning the blog tour (which I’ll start putting together somtime next month).

Below you can find all the links to the pre-order pages for whichever ebook format you prefer. I’ve also included a couple of blog buttons and clickable tweet for anyone who wants to share and spread the word. :) 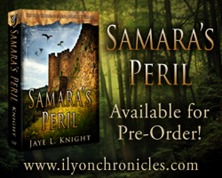