Today I’m pleased to be part of the blog tour for Adela’s Curse by Claire Banschbach! Below you’ll find all the information for you newest book as well as an excerpt and giveaway! 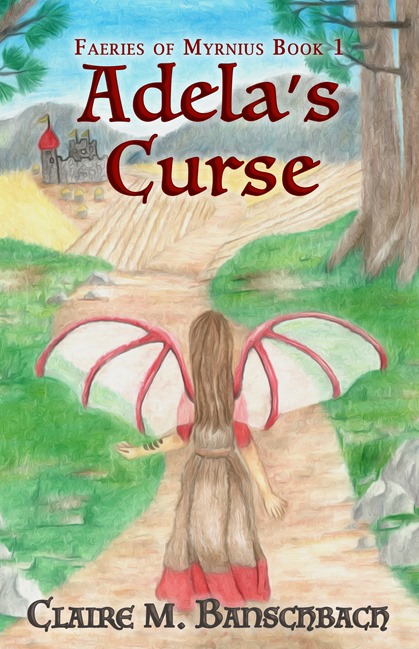 A curse. A murderous scheme. A choice.

A witch and her master capture a young faery and command her to kill their enemy. Adela has no choice but to obey. If she does not, they will force the location of her people’s mountain home from her and kill her. To make matters even worse, the person she is to kill is only a man struggling to save his dying land and mend a broken heart.

Count Stefan is a man simply trying to forget the woman he loves and save a land crippled by drought. When a mysterious woman arrives at his castle claiming to be a seamstress, he knows she is more than she seems.

Adela enlists the help of Damian, another faery, to try and delay the inevitable. He insists she has a choice. But with the witch controlling her every move, does she?

Adela touched the ground again. She drove away the blight, but no more. She had no wish to reveal herself as a faery. She and the boy looked up as hoof beats sounded behind them. Apprehension filled her, and she stood clutching her bag.

Horses and their riders clattered to a halt beside them. The boy scrambled up from his perch on the rock and bowed to the foremost rider. The boy’s father also heard the horses and came running outside. Adela decided that the best thing to do was to curtsey.

“Bartek, what happened to your lands?” the leader of the troop asked. They all heard the shock in his voice, and turned to look. The land had soaked up Adela’s power, drawing more from her than she realized. The farmer’s grain stood tall and the dried streambed that ran through his lands gurgled merrily with water again. Bartek was just as shocked as the others.

“I do not know, my lord Stefan,” he said in wonder. Adela froze. This was the Count!

The Count turned to her. “Who are you?”

“I am a traveler through these lands, sir,” she replied.

“A woman who travels alone?” he was surprised.

“The road looked safe enough and my destination is not much further,” she said truthfully.

“And what is your destination?”

“The village that lies by the Count’s castle; I had hoped to find work there,” she said. Another lie. She forced herself to glance up at the Count. He sat his horse easily and his square jaw reminded her of Damian. She shoved the thought away.

“Did you have something to do with this?” he asked, pointing to the fields.

“How could I, my lord? I’m only a seamstress. I know nothing about the land.” Lie.

The Count looked intently down at her as if trying to determine the truth of her words. She gazed back as steadily as she could.

“If you are going to Chelm, then allow us to accompany you there,” he said.

“I couldn’t intrude on you like that, my lord,” she said, praying he would ride on.

“Nonsense. Captain Cyryl, take her up behind you,” he ordered.

The grizzled captain reached down and pulled Adela up behind him.

“You’d best hold on, miss,” Cyryl said gruffly, as she attempted to settle comfortably on the horse’s broad rump.

The farmer and his son bowed again as the troop rode off.

“It was her, father, I know it!” the boy exclaimed. “She did something!”

“Maybe, lad,” his father said. “But then maybe she didn’t. She’d have to be a faery. And faeries don’t lie.”

Claire Banschbach was born and raised in Midland, TX, the fourth of eight children. She was homeschooled through high school and is now a proud member of the Texas A&M University class of 2014. She is currently working on her Doctorate of Physical Therapy at Texas Tech University Health Science Center. She continues to write in her spare time (and often when she doesn’t have spare time). She hopes her strong foundation in God will help to guide her writing.

3 winners! Prizes include 2 copies of Adela’s Curse, and a paperback version of The Rise of Aredor to celebrate its 2 year anniversary on March 11! Open to international entries.