Today I’m taking part in Faith Blum’s blog tour for her three new Hymns of the West novellas! Check out the info about each story and then read the fun interview with Faith. And don’t forget to enter the giveaway! 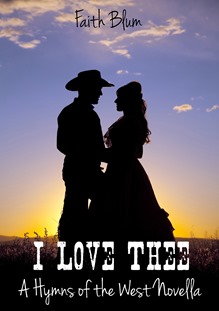 When his sister dies, leaving him with four children ages 8 and under, Cole Baxter gets desperate. He decides he needs a wife. He writes to a mail order bride before realizing he almost through away the best woman he could have. Approximately 18,000 words 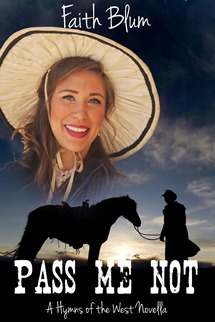 Let me at Thy throne of mercy/Find a sweet relief/Kneeling there in deep contrition/Help my unbelief Timothy is at his wit's end. His twelve year old half-sister has run off five housekeepers in almost a year. Since their parents died, she has grown wilder than ever. What can he do? As he looks for a new housekeeper, his eye catches sight of a mail order bride advertisement. One young lady has a younger sister and sounds like a God-fearing woman. Could this be the answer to his dilemma or will Louise run her off, too? Approximately 18,000 words 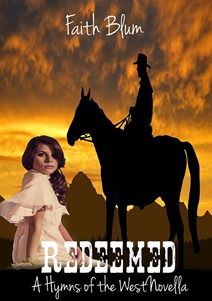 Mail Order bride seeks wealthy Western man. Write Mona Sommers, Pittsburgh, Pennsylvania. Alexander Granger is tired of his father’s lectures and sermons. It’s time for payback. His plan is to pretend to marry a woman and scandalize his father when he finds out they aren’t really married. Will Mona accept his offer? Can Alex get away with his plan?

1. What was the first story you ever wrote?

Oh my. I don’t remember for sure. The first one I remember is about twins who were really good at throwing Frisbee and competed. They also solved mysteries and solved a mystery while also make it to the national Frisbee competition and meeting the President. It was fun, but I wouldn’t want anyone else reading it right now. :P

Writing or getting published. For writing, I just liked to write, so I did. Getting published, I found out about a contest and decided to enter it. I ended up not winning, but it gave me the push to publish them myself.

Writing a fanfiction story. First because it’s a fantasy which is a genre I have never written in before. Second, it’s a fairy tale retelling. And third, I wrote it for fun rather than to share and publish. I think what was most interesting about it was that I didn’t have to be quite so uptight about how well it was written, but I still tried to write it well.

Kate Warne. She was the first woman to become a Pinkerton Detective. She sounds like a fascinating individual. I would love to have followed her around while she worked on a case.

Do you prefer to write novels or novellas?

Do you have a special spot where you like to write?

My bedroom. Specifically at my desk. It’s where I do most of my writing. Although, when I’m writing by hand, I can do my writing anywhere and usually prefer laying on my bed.

Faith Blum is a 24 year old home school graduate who enjoys doing many right-brained activities such as reading, crafting, writing, and playing piano. Her favorite genre to read and write is Historical Fiction, more specifically, Westerns. In the Hymns of the West series, she has endeavored to create clean, fun, and challenging Western stories for the whole family. She currently has three novels and one novella published or available for preorder. Website | Blog | Facebook | Twitter | Pinterest

Faith is giving away prizes to two people.

The first prize winner will receive: ~A paperback of the novel that started the novellas, Amazing Grace (or novel of choice) ~One handpainted bookmark (painted by the author’s sister) ~A silver pen nib bookmark

The second prize winner will receive: ~An ebook copy of Amazing Grace (or ebook of choice) ~Two handpainted bookmarks (painted by the author’s sister)