A Special Thank You 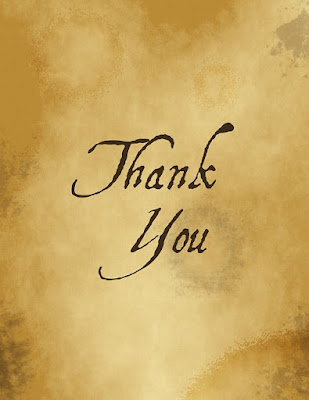 Can you believe May is just about over? I knew it would go fast with everything I had planned, but I can’t believe we’ve reached the end already. This means, sadly, that the Resistance Anniversary Celebration is just about over. This will be one of my last posts for it. I wasn’t sure what to write about today. Originally I was going to find some fun Ilyon Chronicles facts to share on the Ilyon blog like I usually do on Wednesdays, but I decided on something else. I decided to say thank you.

Being an author is a tough job. I was 14 or 15 when I first decided I wanted to be one. I knew nothing about it or what it would entail, I just knew I wanted to be like Tolkien. The thing about dreams is, when they first come to you, they seem so possible yet so unobtainable at the same time. I dreamed about what it would be like to have people read my stories, what it would be like to sign books (yes, I did practice my signature, though it ended up not meaning anything since I ended up using a pen name). Silly little daydreams you want to come true but never really believe will come true.

Well, it did come true a few years later. I was eighteen when published my first book, The Pirate Daughter’s Promise. I still had no idea what I was doing, but you have to start somewhere, right? I published several more books following that. But you know what? The dream wasn’t everything I thought it would be. Sure, it was fun and exciting. I was actually an author! But it was really discouraging too. That’s kind of what happens when you first start something and don’t know what you’re doing. You feel like you’re getting nowhere. I had high times and low times. One of those low times was around the time I started Ilyon Chronicles. I knew there was something different about it, but I had no idea the extent of what God was going to do with it. After almost eight years of being an author, I finally feel as though I’m getting somewhere. I finally feel like I have even a small grasp on what I am doing. Have the discouraging times disappeared? No, this job is still very hard, but the blessings that come through it outweigh the hard parts.

This is where my thank you comes in. I owe my ultimate thanks to my Savior who redeemed me and gave me a gift I love and can use to serve Him. I thank my mom who taught me and passed on her love for writing. I wouldn’t have made it far without her. And I thank you, all of my readers, because, without you, I wouldn’t be where I am. The enthusiasm I’ve gotten for Ilyon Chronicles is exactly what I dreamed about in my teens, but never imagined actually happening. Your notes of encouragement, the discussions over at Goodreads that make me laugh, the way you love my characters—it means SO much to me. I’ve received so many messages thanking me for writing my books, but I have to say thank YOU. You’re the ones helping to fulfill my dreams. You’re the ones showing me that all things are possible with God—that a highly introverted, imperfect, small town girl can actually touch the lives of people she has never met. So thank you for being part of this adventure with me. I look forward to journeying on with all of you!

P.S. Check out Katie’s awesome “How I Discovered Ilyon” post today! These are the sort of things that make me love being an author. :)

Also, there are only a couple of days to enter the anniversary giveaway! (US entries only please.)


a Rafflecopter giveaway
Posted by Jaye L. Knight at 9:25 AM