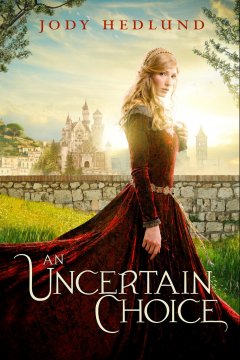 The first book in a new YA historical fiction series from bestselling author Jody Hedlund.
Due to her parents' promise at her birth, Lady Rosemarie has been prepared to become a nun on the day she turns eighteen. Then, a month before her birthday, a friend of her father's enters the kingdom and proclaims her parents' will left a second choice-if Rosemarie can marry before the eve of her eighteenth year, she will be exempt from the ancient vow.
Before long, Rosemarie is presented with the three most handsome and brave knights in the land. But when the competition for her heart seemingly results in a knight playing foul, she begins to wonder if the cloister is the best place after all. If only one of the knights-the one who appears the most guilty-had not already captured her heart.
My Rating: 4 Stars
I was a little leery starting An Uncertain Choice. I’d seen several not so great reviews before I started it, so I went in with rather low expectations. I think that might be one reason I enjoyed it. I almost always find myself surprised when I go in with low expectations whether it be books or movies. While the book may have been predictable in areas and perhaps a little silly and unrealistic at times, I liked it quite a bit. I enjoyed the characters, particularly Derrick and the duke. I just loved their nobility. I even liked Rosemarie, which is quite a surprise knowing my usual dislike for female protagonists. Yes, her naiveté and indecisiveness was a bit frustrating at times, she still grew on me. Aside from a few darker moments involving torture and such, this was a light, very fairytale-ish read, especially in the romance department. And who says fairy tale stories can’t be a little silly and unrealistic? Once in a while, you just need fun stories like that to unwind and relax. There was definitely adventure to it as well. I devoured the last quarter of the book, almost skimming because I was so anxious to see what would happen (even if I could predict the ending). So if you’re looking for a (mostly) light and fun fairytale princess-like story, then I recommend checking it out.
I received a copy of this book free from BookLook Bloggers in exchange for my honest review.