What a week it has been! Thank you to everyone who made this my biggest and best book release ever! There were so many fun and exciting moments. For one thing, The King’s Scrolls hit #1 in Christian Fantasy on Amazon after the first day of release!

And then, on Thursday, I woke up to discover that Resistance was #1 in at least 3 categories, even beating out Left Behind! :D

It has been at #1 in Christian Fantasy ever since then, which is really cool. Again, a huge thank you to everyone who helped make it happen. It would have been a pretty boring release week without you. If you haven’t started the adventure yet, you can find Resistance and The King’s Scrolls on Amazon for both Kindle and paperback. And if you missed the tour, here’s a recap.

“Let me just sit here wordlessly and think about the thrilling adventure I just finished.” ~ Shantelle at A Writer’s Heart

“A bittersweet story that is quintessentially satisfying, which will ignite a spark of hope in any reader’s heart.” ~ Miranda at To Be A Person

“This book took me on an emotional roller-coaster that took me some time to recover from … in a good way.” ~ Sara at The Destiny of One

“Jaye has outdone herself with this book; I loved Resistance, but TKS is my new favorite.” ~ Meagan at Crumpets 'n' Cream

“I could not put it down from the minute I got it to the minute I read the last sentence.” ~ Morgan at Spreading the Word

“A beautiful book that brings glory to God, I would definitely recommend this to Christian Fantasy lovers.” ~ Athelas at Red Lettering

“There’s only a few books I get excited enough about to post about multiple times. But this is definitely one of the top of my list.” ~ Erika at Written Rest

“It has everything that I loved about Resistance. The strong message of faith, the exciting plot, the setting reminiscent of the Roman Empire, and the characters who wormed their way into my heart.” ~ Ghost Ryter at Anything, Everything

“The characters in this book were amazing, both the ones that we already knew from the first book, and the new faces.” ~ Kendra at O. Scarlett! Reviews

“This book challenged me (Jon) to think about what my reaction would be if the US follows (or continues to follow) the same course.” ~ Jonathan at Leah’s Bookshelf

“This series has quickly become some of my favourite fantasy books I have ever read.” ~ Alyssa at The American Anglophile

“This book is the reason why Hollywood created special effects. The story is screaming for the big screen.” ~ Vic at Vic's Media Room

“I was amazed how all of the shocking plot twists in this book worked together seamlessly to strengthen the plot in the end.” ~ Tialla at Tialla’s Tellings

“Get this book. Now. It is amazing and well worth the  money. As soon as autographed copies are available, I plan to order mine to add to my bookshelf next to Resistance. Even if you don’t usually like Fantasy (like me) you should at least try Jaye’s series.” ~ Faith at Writings, Ramblings, and Reflections

“Even in the bleakest moments the characters’ faith in God weaves threads of hope through the story. Amazing Christian fantasy! Highly recommended!” ~ Claire at Claire M. Banschbach- Thoughts and Rants

“The storytelling was fantastic and beautiful as always, and along with all the adventures of the recurring characters, I really loved reading about Timothy and Aaron's story.” ~ Melody at Melody Jackson, Author

“Kyrin and Jace are great characters and the Knight has done an awesome job of building their back stories.” ~ Rebekah at Backing Books

“Seriously, every book I've read by Jaye/Molly has been better than her previous book.” ~ Morgan at Shire Reviews

“The King's Scrolls is a fabulous sequel to my favorite book in the world,Resistance.” ~ Alea at Elvish Pens, Fantastical Writings

“New characters, new tests, new adventures, and dragons! A book doesn’t get better than this!” ~ Tricia at The Pen of a Ready Writer

“The characters are very fleshed out and feel like someone you’ve known forever.” ~ Jodi Woody at Musings of a Middle Age Author 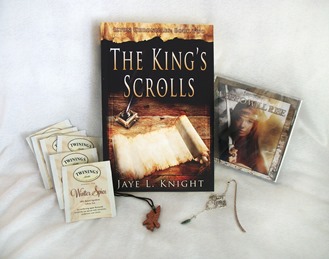 The winner of the TKS Winter Prize Pack choosen randomly by Rafflecopter is . . . Gillian Bronte Adams! Congratulations, Gillian! I’ve sent you an email to get your address so I can ship your prize.

And for everyone who didn’t win this giveaway, you can still enter to win one of 3 autographed copies of TKS over at Goodreads!

The end of one journey, but the beginning of another.

Now that The King’s Scrolls is finished and out there for the world to discover, it feels like the end of a journey for me. However, it is only the beginning of a new journey as I look ahead to preparing book three for its release. What better way to end this blog tour than to officially announce the book’s title? Some of you know it already since I put it at the end of The King’s Scrolls, but here is my official announcement and temporary cover. Ilyon Chronicles – Book Three is called . . . 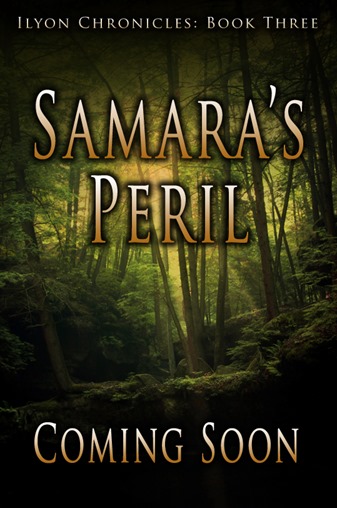 When an imminent threat rises against the country of Samara, those in Landale must face two desperate struggles—one on the walls of Samara’s mighty stronghold and the other on the battlefield of Jace’s heart where victory might only be achievable through great sacrifice.

I am incredibly excited to share this book. It answers many of the questions I get most often. It’s a big turning point in the series. While I don’t have a release date for it, I would very much like to release it yet this year. But only time will tell. It all depends on how editing goes. Your prayers as I soon start the editing process are very much appreciated. I have one more thing to leave you with as I end this tour and look ahead to the next book. This song, On My Own by Ashes Remain, was my number one source of inspiration while I was writing Samara’s Peril. If the book were ever made into a movie and then had a music video, this would be the song I’d want for it. It fits the story perfectly.