My Kingdom for a Quest—Blog Tour

Happy Valentine’s Day! Or perhaps not, if you’re single. :P Which I am, but instead of being too cut up over it, I’m here with a special blog tour post! ;) (Cool swords and adventure novels are even better than chocolate anyway . . . most of the time.) Turns out The King’s Scrolls is sort of sharing a release week with a new release from my author friend, Kendra K. Ardnek! So allow me to introduce you to My Kingdom for a Quest (The Bookania Quests Book 3), which releases today! As part of the tour, I’m also sharing a fun interview with Kendra! 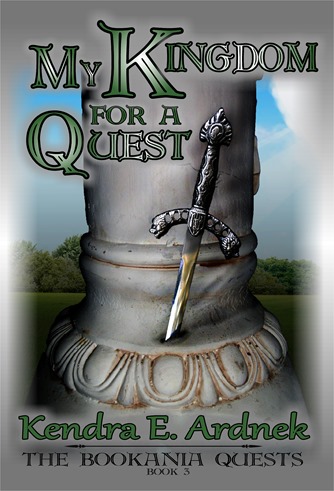 Arthur is the rightful king of Briton, but his Uncle Mordreth refuses to give up the regency.   Arthur and Grandfather are now returning with allies to wrestle the kingdom from his uncle's grasp.  But not all is as it seems among his allies, and everyone has secrets.  New loves, old loves, lost loves, kingdoms conquered and kingdoms stolen. Who is the real "rightful heir" and will the nearly forgotten sword in the stone finally answer this question?

1. What inspired you to write The Bookania Quests?

I’ve always loved Fairy Tales, I’ve been rewriting them since I was introduced to them, but they’d fallen to the back burner for a few years while I was working on other projects. One day, when I was fifteen, my mother suggested I write sequels to various fairy tale, and despite the fact that my WIP list was already staggering (including, but not limited to, two seven-book series, two trilogies, and a half-dozen standalones), I was all gung-ho and let’s start with Sleeping Beauty. Except … I couldn’t get the Sleeping Beauty story to go anywhere.

A few weeks later, I was folding laundry, fairy tales on my mind, when I had a brilliant idea for a character – a girl who, due to the mistake of a fairy godmother, had the gift of best swordsman in the world. Not wanting to add yet another book to my list of WIPs, I decided to add her to the Sleeping Beauty story. She proceeded to take over and mold the entire series around her.

A character who likes me, that’s for certain. In that case, it’s a toss-up between Maryanne and Laura. Maryanne is a multi-linguist, questing expert, and owner of two mythical pets (one of them a dragon). Laura is capable of creating and controlling doors between worlds. I’m looking forward to releasing their books within the next few years.

Characters are fun … but I think I enjoy world-building a little bit more. I have created several worlds, all different and completely interesting. I love getting into the nitty-gritty logistics of a world. Bookania exists within a book, with a repeating history that is interesting to work with. Rizkaland (which will be debuting later this year) is a cylindrical world with rainbow water. Dialcia (In a book I’m coauthoring with Miss Jack Lewis Baillot), exists within an inverted sphere where light controls gravity.

Possibilities are endless when you world-build. I love exploring all of those possibilities.

I haven’t seen any of these movies/TV shows, but that’s beside the point.

That’s about all of the characters I have cast specifically … though if I could get Rosamund Pike for Rosamond, I think that’d be neat.

I’m going to agree with you and say the first draft. I know a lot of people like them for the freedom they give, but they’re just so intimidating! I much prefer the freedom of the blazed path in draft 2.

My currently writing list contains an average of ten to twelve books on it at any given time. Currently, it includes, though isn’t limited to: Book 3.5 and 4 of the Bookania Quests, the second book of my Rizkaland Legends (fifth draft – this was the story that taught me how to write), the first two books of my Super Hero Boarding School Dystopic trilogy, and the book that I’m coauthoring with Jack (the one set in the inverted sphere world). So, lots of interesting stuff on my plate.

However, for publishing plans, which are far more certain and concrete, I intend to release the first book of the Rizkaland Legends at the end of August. I’m really excited about this, I’d planned for the book to be my debut (didn’t happen, obviously), as it is, it will be my seventh book. This is the story of two teens who are thrust into another world, declared its prophesied heroes and rightful rulers, and forced to work together. It was such a fun book to write, I adore the world and the characters, and I can’t wait to share it with everyone.

If I can get book 3.5 written, as well as a few extra short stories, I also hope to release a Bookania collection around Christmas time.

Despite popular belief among my characters, I do have a life beyond meddling with theirs. I read, knit, crochet, run around the yard like a crazy person, cook spaghetti (and other food when my family demands it), pretend I’m an artist, organize my bookshelves, collect giraffe and nutcracker figurines, and put together 500 piece puzzles.

The Chronicles of Narnia, The Space Trilogy, and The Great Divorce by C.S. Lewis.

Ella Enchanted and The Princess Collection by Gail Carson Levine

Pride and Prejudice and Emma by Jane Austen

Dragons in our Midst and Oracles of Fire by Bryan Davis

And, of course, your own Ilyon Chronicles and Makilien Trilogy.

The list could go on, but you said some. I'll stop there.

-I have a scar on my throat from when a hot water tank attacked me when I was seven.

-And a scar on my leg from when I stabbed myself with a pencil the year before.

-I should probably get off the subject of scars. Let's see … Despite the fact that we never watched the shows as kids, my sister and I collected My Little Ponies (Generation 3). Since we didn't see the show, we made up our own stories about them, adding in all sorts of other figurines, both horse and not. We had quite a complicated society …

Edit, rewrite, and then edit again. Competition is fierce these days, and whether you go traditional or indie, make sure your story is polished to the best of your ability, then find a GOOD critique group, and have them look it over. If you feel it's necessary, hire an editor. Refuse to have mediocre writing. 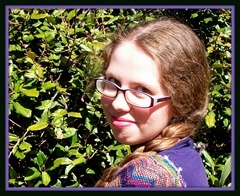 Kendra E. Ardnek loves fairy tales and twisting them in new and exciting ways.  She's been practicing her skills on her dozen plus cousins and siblings for years, "Finish your story, Kendra", is frequently heard at family gatherings.  Her sole life goal has always been to grow up and be an author of fantasy and children's tales that also glorify God and his Word. You can read more about her on her blog,knittedbygodsplan.blogspot.com.

To celebrate the tour, Kendra is sharing the following books for free for Kindle! Make sure to check them out!

Sew, It's a Quest (The Bookania Quests Book 1)
The Woodcutter Quince and Other Stories
The Ankulen

Click here to visit Kendra’s blog and see the rest of the stops on the tour!