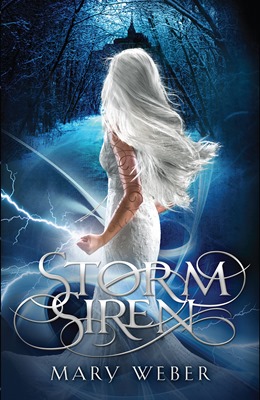 It took way longer than it should have, but here, finally, is my review of Storm Siren!

I had been anxiously looking forward to reading Storm Siren ever since I first set eyes on the cover. Just look at it. Isn’t it one of the most gorgeous covers you’ve ever seen? I suppose I’m a bit biased considering my obsession with the color blue. But anyway, the book itself did not disappoint. Mary Weber created a fascinating world that was very different from other fantasy books I’ve read (and I’ve read quite a few since it’s my favorite genre). The society almost felt like The Hunger Games with the crazy costumes worn at the parties. Another of the things I found so different was that the book was in first person. I’m not sure I’ve read a first person fantasy before this. I personally prefer third person, but Mary did such an excellent job with first person that it didn’t bother me at all. Even though the whole book was from Nym’s point-of-view, you get a very clear sense of all the different character’s personalities, and they’re each very distinctive.

My favorite character was probably Eogan. I especially loved the twist when you learn his backstory. But I can happily say I really, really liked Nym too. That’s a big deal. I always have a hard time finding female protagonists I actually like, especially in first person stories.

If you’re looking for a lighthearted read, this probably isn’t for you. There’s a lot of cruelty and it is a pretty dark story at times. And if you’re used to really obvious Christian stories, this probably doesn’t fit that. But it has a strong theme of knowing your worth and that you were created for a reason. So if you don’t mind darker tones and like following the stories of broken characters like I do, I do recommend it to fellow fantasy readers who are looking for something different and interesting. Just be prepared for the agonizing cliffhanger ending! I literally yelled, “No!!” when I finished. Now I have to try to be patient book two’s release next summer.

I received this book free from BookLook Bloggers in exchange for my honest review.