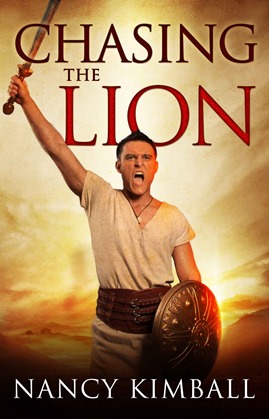 From the blood-soaked sand of the Roman arena, a divine destiny will rise.

For as long as Jonathan Tarquinius can remember, everyone has wanted something from him. His half brother wants him dead. His master’s wife wants his innocence. The gladiator dealers want him to fight—and die—for their greed. Rome’s most famous prostitute wants his love. And the gentle slave girl who tends the wounds on his body and the hidden ones on his soul longs for him to return to his faith.

What Jonathan wants is simple. Freedom. But God wants something from Jonathan too—something more than anyone would ever imagine. The young warrior’s journey will push him to the limits of human endurance and teach him that true freedom is found within. The greatest battle Jonathan must ever fight will not come in the arena, but deep within himself as he is forced to choose between vengeance and mercy—with the fate of an empire and the life of the woman he loves hanging in the balance.

Right off, let me tell you Chasing the Lion has made it to the number one spot of my historical fiction favorites, and is my third all-time favorite book after Lord of the Rings and Books of the Infinite by R.J. Larson. There are few books I’ve enjoyed quite to this extent. I also want to make a note that I recommend it for older teen and adult readers. It does not shy away from the rampant immorality of Roman society, though I felt Nancy Kimball handled it well without unnecessary details. It also contains violence and extreme cruelty (most scenes cut away, but you still have to read about the aftermath). I have a pretty high tolerance when I read, but I caution more sensitive.

That said, I devoured this book in a little over a day. I first came across it a couple of weeks ago on one of the ebook sale websites I follow. I never spend more than 99 cents on an ebook I’ve never heard of before. I just have too many to read right now. This one was $3.99. Normally, I would have passed it up, but when I saw it involved gladiators, I just couldn’t. (I have quite an interest in gladiators since that became part of Jace’s backstory in Ilyon Chronicles.) I am SO glad I bought it. Chasing the Lion has a very Joseph-like storyline in the beginning, though Jonathan is not quite Joseph in character. He spends a good portion of the book driven by hatred and desire for revenge, yet, was so noble. I completely fell in love with his character. He was so easy to relate to, and my heart just ached with all his hardship. I don’t remember the last character who pulled at my emotions like he did. My heart would just be pounding sometimes as I was reading.

The book sucked me right in. The writing was so good that I completely forgot I was reading. I was just right there in the story. And it wasn’t only Jonathan who made the book. It had a very diverse cast of interesting individuals and points-of-view. Though historical, it had just enough description to lay out the setting, but not so much as to draw you out of the story itself. A perfect balance, in my opinion.

But I think what set this book apart from most was the spiritual aspect of it. Most fiction is just entertainment and relaxation for me. For more, I read non-fiction. It has to be a special book to touch me spiritually, and this one did. I feel like God brought it into my life at just the right time. Reading about how the believers in the book endured their trials and clung to their faith encouraged me to do the same in the trials I’m facing. The theme of forgiveness was also very powerful.

I can’t say enough good things about this book, and I can hardly wait to read more by Nancy Kimball. This is the first time I’ve wanted to start reading a book again immediately after I finished it. I even went and bought the paperback right away just so I could grab it off my shelf and easily flip to my favorite parts.