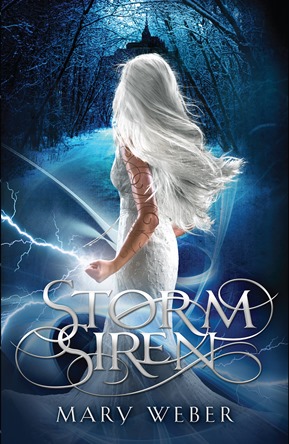 Today is so exciting! I’ve been looking forward to this post for quite a while. When I first saw the cover of Storm Siren, I nearly started drooling. I mean, it’s blue! And one look and my blog and website and it’s obvious how obsessed I am with blue. I jumped at the chance to join the blog tour based primarily on this lovely cover. Seriously, this is one of my top two favorite covers ever along with Judge by R.J. Larson. I want it as a poster for my room. Of course, the back cover drew me in as well, and I can say it’s a fascinating story that’s quite different from a lot of fantasy I’ve read before. The characters are very intriguing, but I’ll save the rest of my thoughts for my review that I’ll be working on soon.

Now, as part of the tour, I get to share a totally awesome interview with Mary Weber. This is one of the most fun interviews I’ve had on my blog so far. But first, a little about the book and author. 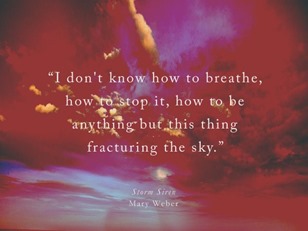 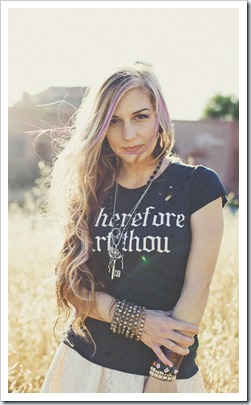 Mary Weber is a ridiculously uncoordinated girl plotting to take over make-believe worlds through books, handstands, and imaginary throwing knives.

In her spare time, she feeds unicorns, sings 80's hairband songs to her three muggle children, and ogles her husband who looks strikingly like Wolverine. They live in California, which is perfect for stalking L.A. bands, Joss Whedon, and the ocean.

And now for the interview! Mary’s answers are in blue while any of my input will be in purple.

1. What inspired you to write Storm Siren?

It was a couple of things actually. :0) (1) My obsession for all things superhero and Last Airbender. (2) My absolute love for the teen girls I work with. It seems like so often our culture is shouting mixed messages at them regarding what power and beauty are. They’re told to “just be themselves” but then heaped with shallow expectations and made to feel not quite good enough. It can be disrespectful and devaluing. Thus, the idea for Storm Siren is based on my belief that each of us is born with unique value and destiny. And when we embrace that? We truly ARE powerful.

Okay, so I’m tempted to say Eogan (because HELLO) but I’m going to have to go with Lord Myles! The banter with (and taunting of) that disturbing man would be fantastic.

Oh I love that characters are your favorite part!! They’re definitely mine too. I think perhaps it’s the weirder side of our brains letting loose to shout, “I’m free! I’m free!”

*laughs* I’m going to be honest - as much as I adore building characters, I’d never really thought of casting them until someone asked me this last week! And I’m not going to lie - I totally had to hit up Google for names. So, for Nym, I think maybe Willa Holland (I love her spunk!), for Eogan – Michael Ealy (because those EYES!), and for Adora – I’m thinking Anne Hathaway or Sarah Jessica Parker. As far as Colin goes…can anyone really measure up to that sweet boy? Sigh.

Michael Ealy does have gorgeous eyes. ;)

Yes, yes, all the YES. (Are you and I twins? Because aside from casting our characters I’m beginning to think we share the same writing brain.) I love the other aspects of the process, but the actual sitting down writing kicks my rear.

So now I have to ask – do you like honey lattes? Because if you do, you might in fact be my long-lost sister-from-another-mother.

Sure! I recently turned in book 2 of the Storm Siren Trilogy, and now I’m working on plotting out book 3. Fingers crossed for where Nym takes us!

But I want to know about YOUR current project, Jaye!! What are you working on?

Well, I for one, can’t wait for the next Storm Siren book! But anyway, I’m right in the middle of editing book 2 of Ilyon Chronicles for publication and just started writing book 5 of the series. It’s kind of odd going back and forth between the two because my characters are in such different places, but that’s the sort of weird things we writers have to deal with. :P

Oh man, I absolutely adore Maggie Stiefvater’s The Scorpio Races for the prose, atmosphere, and concept. There’s also Marissa Meyer’s Lunar Chronicles series, which is super creative and fun. Baroness Orczy’s The Scarlet Pimpernel rocks my world (mainly because I wanted to marry Sir Percy for a good ten years of my life). And, of course, Howl’s Moving Castle and Ender’s Game are permanently glued to my shelf. :0)

What are some of YOUR favorites, Jaye?!!

The Lord of the Rings has to go right up at the top. I probably wouldn’t be a fantasy author if my teen years wouldn’t have been filled with fangirling over Middle-earth and everything in it. In very close second is the Books of the Infinite series by R.J. Larson. I want to marry Kien, like, yesterday, lol! ;) But seriously, I love her characters and their bantering. I do love historical fiction too. Anything by Karen Witemeyer has a good chance of making it onto my favorites list.

(1) As a kid, I once wrote on my parents’ family room wall and then blamed my older brother for it. Even though it was clearly signed “Mary.” I’ve never told him. (Are you reading this, Dave?)
(2) I used to be a lounge singer on Mos Eisley. Except Luke (Skywalker) stole my gig with his whiny rendition of “Let it Go.”
(3) I get serious motion-sickness. Like, I get nauseous in ROCKING CHAIRS. I am not proud of this.

I can totally sympathize with the motion-sickness! I can handle rocking chairs, but I can barely spend ten minutes in a car without the risk of getting sick.

Oh fun! Well, my advice is simply totally stolen from my own writing mentors. Mainly: Keep reading. Keep writing! And find mentors who can critique and guide your work. Also, don’t be afraid to reach deep inside your soul until you find your voice – the one that’s the most scared to be heard, because it’s also usually the one with the most heart. And that heart is what the world needs.

And thank you for such an awesome interview! Now I shall always consider you my writing twin. :D

Make sure you check out the rest of the stops on the tour here!

a Rafflecopter giveaway
Posted by Jaye L. Knight at 12:00 AM