Yes, that’s right, today is a special day for me. Exactly one year ago, I officially took on the name of Jaye L. Knight. I’m not sure I realized what a significant decision it would be at the time, but it was definitely the start of a new chapter and new direction in my writing career. Also, August 5th will be my one year blogiversary, so I’ve got some fun things planned including a giveaway with two prizes at the end of this post.

Being this is the one year anniversary of my pen name, I thought it would be fun to share a little more of the story behind it. After all, the name Jaye isn’t all that common. So where did it come from? Have any of you wondered if it came from G.I. Joe? Well, if you have, you would actually be right. As funny and unlikely as it is, that is where I got the name. When I watched G.I. Joe: Retaliation with my family one night last summer and saw Lady Jaye’s name, I immediately thought, “Hey, that is a really cool way to spell that.” At first, it didn’t even enter my mind to use it as a pen name. I was automatically thinking it was a cool character name to use sometime.

Then, as I was getting ready for bed, I somehow ended up pairing the name with Knight. That was actually one of the last names I had in mind the first time I ever contemplated pen names years ago. Adding it to Jaye was how I first started thinking it would be a really awesome pen name. It needed a little something though, so I went through the alphabet and decided L sounded good stuck in there. I just kept thinking about it as I was falling asleep and lamenting the fact I already had a pen name because I really, really wanted to use it.

Skip ahead to morning. Still thinking about it. I really didn’t know if it would be a good idea to change pen names, but I told my mom about it and after a good discussion in the kitchen, I decided to go for it. Now, looking back over the last year, it was one of the best decisions I’ve made. At first, it was a little scary because it was like starting over, and I felt like I needed to build a whole new author platform, but the progress and things God has enabled me to accomplish in the last twelve months of being Jaye L. Knight have been amazing. I’ve met tons of new people and feel like I already have a much more solid platform than I did as Molly Evangeline.

Now that you have the backstory on the name and know that it is, in fact, tied to G.I. Joe, I’ll address another question some may be asking. What does the L stand for? Well, for the first week, it didn’t stand for anything. It just sounded good. :) But then I figured I had better come up with a good name in case someone were to ask me. I thought about it for a couple of days, going through a bunch of L names to find one that both fit and I liked. Easier said than done. But, as God has a way of doing when it comes to my writing career, He dropped in the perfect thing at just the right time. Now I can tell you the L stands for Lee. I’ve always really liked that name, and it fits perfectly. So my full author name is Jaye Lee Knight. Will I ever use it on a book cover? Probably. I know I’d like to. It just depends on which one I think it fits in the future.

So there it is, all the mysteries of my pen name unlocked. ;) Isn’t funny how God works? If I had never watched that movie that night, I would certainly still be using the name Molly Evangeline. But it was the perfect time in my life and writing career for a new start. God knew that, and I look forward to the next year in my life as Jaye L. Knight and seeing where it goes.

As part of my little pen name anniversary and blogiversary, I’m giving away an autographed copy of Resistance and my favorite necklace from my Etsy shop. There will be two winners—one for the book and one for the necklace. (U.S. entries only. Sorry, international shipping is just too high.) I will draw the winners on August 15th. The winner of the necklace with get their choice of color and word charm. (Options can be seen on the Etsy listing.) 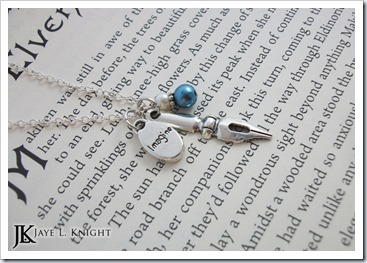