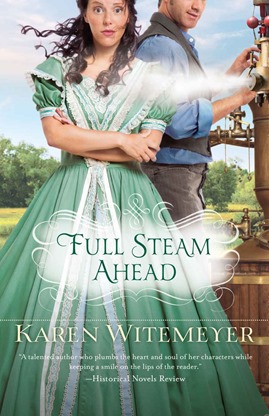 When love simmers between a reclusive scientist and a wealthy debutante, will they abandon ship or is it full steam ahead?

Nicole Renard returns home to Galveston, Texas, to find her father deathly ill. Though she loves him, Nicole's father has always focused on what she's not. Not male. Not married. Not able to run Renard Shipping. Vowing to find a suitable husband to give her father the heir he desires before it's too late, Nicole sets out with the Renard family's greatest treasure as her dowry: the highly coveted Lafitte Dagger. But her father's rivals come after the dagger, forcing a change in Nicole's plans.

After a boiler explosion aboard the Louisiana nearly took his life, Darius Thornton has been a man obsessed. He will do anything to stop even one more steamship disaster. Even if it means letting a female secretary into his secluded world.

Nicole is determined not to let her odd employer scare her off with his explosive experiments, yet when respect and mutual attraction grow between them, a new fear arises. How can she acquire an heir for her father when her heart belongs to another? And when her father's rivals discover her hiding place, will she have to choose between that love and her family's legacy?

Okay, my friends will probably look at my 4 star rating and go, “Whaaaa?” Yes, just like the minion in Despicable Me. ;) But let me explain, and don’t let the fact that I didn’t give it 5 stars fool you. Full Steam Ahead is a wonderful book that I thoroughly enjoyed. I mean, it’s Karen Witemeyer. How could it not be great? You’ve heard me say how much I sometimes envy her writing talent, and this book is no exception. It was a little different in that it didn’t have the typical Western feel of her others, which most of the time centered around ranches. Maybe I missed that a little, but this storyline was still fascinating.

I very much enjoyed the characters, although I’m not sure I loved Nicole and Darius, which is why I gave it 4 stars. One thing I’ve learned about myself is that if I don’t love the guy, there’s a good chance I won’t love the book. I don’t know why it’s the guy who matters most to me, but that’s just how it is. Darius took me a bit to warm up to, and even though I really liked him by the end, I didn’t absolutely adore him like I did Crockett, Levi, and Neill in the other books. But that’s just my personal taste, so don’t judge the book on that. Nicole and Darius were a great, as well as amusing, pair to read about and watch fall in love.

The thing is, Karen Witemeyer is so great at writing that even if I don’t personally connect with some of the characters, I still love reading the story. She’s truly a master at writing historical romance. All of her settings and characters are so vivid, and the romance is always a delight. I highly recommend this book as well as any of her previous ones.

I received this book free from Bethany House in exchange for my honest review.