I wanted to take time to give a huge thanks to everyone who participated in my weekend release blitz! I’m always amazed by how many of you sign up to help me spread the word. And everyone who commented during the blitz! You’re all awesome! ;) Here’s a recap of the tour as well as a surprise or two for you at the end. :D Also, there is still time to enter the giveaway! It runs for another couple of days yet!

“And the plot twist in this book…wow! Few other authors I know of could pull off the twist Jaye does in this book, and especially couldn’t do it and heighten the tension for the rest of the series.” – Tricia at Tricia Mingerink

“I love all the characters!! We have, like, six+ narrators throughout the whole book …. and yet, it isn’t overwhelming AT ALL, which I love!” – Alyssa at WritingAnyone

“Exiles sucks the reader in, savoring every word and plot twist, until the very end.” – Meagan at Meagan Davenport

“It was so wonderful, though, to return to the characters that we love so much! And even characters I’ve known for books now, have become even more loved.” – Sara at R535 Blog

“Other books might get lost in my work schedule, buried under tasks I need to do for church, or lay temporarily forgotten while I visit friends … but not when that book contains characters as beloved and missed of Kyrin, Jace, and the others.” – Leah at Leah’s Bookshelf

“I have to tell you all right here and now, this book is very awesome. Very very very awesome.” – Shay at The Elven Padawan

“Yeah, I really liked this book, it was pretty exciting. Jaye did a good job. The setting was super cool too.” – Sam at Books and Arrows

“This book is very un-put down-able.  The moment I saw that I received an ARC from Jaye, I started reading. I finished the book late that night.” – Jess at The Artful Author

“I recommend this novel for a calm day. Have a cup of tea and a few cookies, nestle yourself in the corner of your couch with a blanket, and listen to the rain pattering against your windowpane. And read this book.” – Athelas at Red Lettering

“Readers will be squealing in surprise, horror, and delight at some of the plot twists in this one!” – Gabriellyn at PageTurners

“Trying...to...not...gush... But honestly! This might be favorite book from the series so far! I mean each book just gets better and better and this one really had me by the heart!” -  Ants and Epic at Sutori no Hana

“Exiles is, simply put, a great book. I use “great” for lack of a better word (though “amazing”, “stunning”, and “nothing short of perfect” would all work too).” – Kiara at Bookends

“The book is magic. Pure, entrancing magic that will grip your spiritual, mental, and physical being with its tasteful characters, engrossing plot, and enraging twists.” – Jazzy at Thriving Hope (if you like reviews with lots of awesome gifs, read this one. xD )

“As a general summary, I thoroughly enjoyed reading "Exiles" and highly recommend it.” – Kenzi at Honey Rock Hills

“I'm usually a skeptic of long series because a person can only come up with so many ideas right? But not in this case. Somehow, Jaye made an edge-of-your-seat thriller with plenty of romance and enough adventure to keep me up until midnight, while still building the tension for the books to come!” - E.J W at One Word At A Time

“Usually, one would expect a new sequel to be lesser than the first or second (or third!), but that is not the case with this!  In my humble opinion, Exiles was awesome! if not better than the first three.” – Sarah at Sarah, Plain & Average

“While Exiles may be my least favorite of the series so far, it was, of course, good, and some long awaited and unexpected things happened!” – Natasha at A Camera and a Dreamer

“All the turmoil in the characters, the uncertainty, and getting out of their comfort zones. It was all so deep and true to real life.” – Faith at Writings, Ramblings, and Reflections

“Exiles offers the same depth of character, adventurous plot, breathtaking descriptions, and spiritual parallels as the rest of the series.” – Erika at Resting Life

“Oh. My. Goodness. This book is wonderful. Reading it was rather like going on Expedition Everest at the Animal Kingdom in Walt Disney World. Such an emotional roller-coaster.” – Addyson at The Music of a Story

“You’ll need a seatbelt, believe me. It was nonstop action from there on out! So many unexpecteds. So many surprises. So many shocks. Oh my heart.” – Ivy Rose at Lakeside Publications

“I have been a huge fan of the Ilyon Chronicles since they first released, and not a single book in the series has ever failed to disappoint me. They just seem to keep getting better.” – C.M. Williams at Ember's Reviews

“The action was fantastic, with a twist at the end that.... just blew me away. After that, I think it might be an understatement to say that I am extremely excited for the next novel in the series.” – Rebekah at Backing Books

And don’t forgot to stop by my friend Morgan’s blog for her review tomorrow!

Onward in the series!

As I like to do at the end of these blog tours, I’m officially announcing the title of the next book in the series! 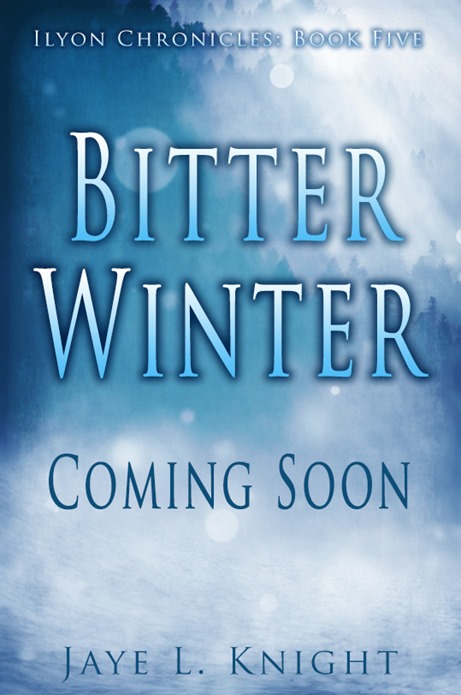 When a catastrophic event leaves the Landale camps reeling and stricken by a deadly illness, Jace must face the dangers of Valcré and an impossible choice to gain the cure.

Bitter Winter is not quite as . . . epic in in scope as the first four books. It’s a more personal story. As you can probably tell by the logline, it’s a very Jace-centric book. (And has some pretty devastating things happen.) It’s the shortest book of the series. But, to make up for that, the book will also include a bonus novella. :D It’s a little story I never saw coming, but two people in Bitter Winter were making eyes at each other and demanded to have a story of their own. :P So, basically, when Bitter Winter releases, you’ll actually be getting two stories. How cool is that? I’m really looking forward to sharing it. While I don’t have a release date yet, you can see a little sneak peek of inspiration on my new Pinterest board. :)

Look what I’ve been working on in secret! :D It’s a short story of when Jace found Tyra. It’s going to be free to anyone who signs up for my emailing list. So, if you’re already signed up, you’ll get it automatically. If not, well, you can always sign up here. ;) I’ll also have a little paperback version for sale for those who have to have it on your shelf with the others. I’m hoping to have it ready to send out in the next couple of weeks or so (if life cooperates). :) Keep an eye on your inboxes. 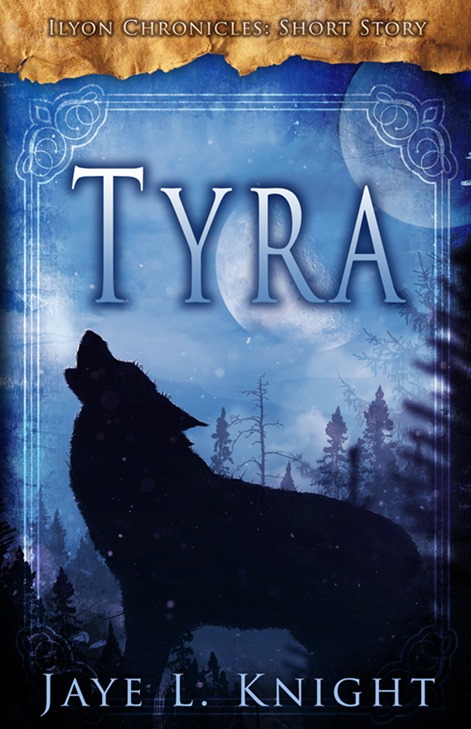 A year ago, Jace was a slave. A gladiator.

Now he has found a home with the only three people who have ever treated him with kindness.

After his first visit to town goes just as disastrously as expected, he seeks solace in the woods, where he discovers a wounded wolf pup. The merciful thing would be to put her out of her misery. However, his desire to help her is stronger. Could he possibly save her in her condition? Would Elôm even care to help if Jace were to ask Him?