I thought it was time for a bit of an update of sorts since my blog has been very quiet as of late. After my crazy busy writing schedule over the summer and then editing The King’s Scrolls, which I sent to my beta readers on October 1st, I’ve sort of taken a vacation the last couple of weeks. I’ve been really bad about doing any kind of updating or keeping up with emails. But I suppose I’ve needed the break. Especially since I’ll be diving back into editing TKS at the beginning of next month after I receive all my feedback. I keep telling myself every day that I should be working on book five. And a have . . . a little. But I keep procrastinating. It’s like when you go on vacation and then really hate going back to work afterwards . As much as I love writing, I kind of feel that way at the moment.

So what have I been doing in my downtime? Video games. I don’t really consider myself a big gamer because I just don’t have the time for it, but I do really like playing sometimes. I spent a couple of afternoons in the last couple weeks playing Minecraft with my brothers. We always have a great time doing that together and munching on gluten free chocolate chip cookies, which have become our official Minecraft snack. :)

I also played through Assassin’s Creed III, which I had purchased a while back but didn’t have a chance to truly play until now. (This is what happens when you grow up with only brothers and no sister. You get into all the action/adventure type games.) It’s probably my all-time favorite video game. I LOVE the historical aspect of it. As most probably know, colonial is one of my favorite time periods. And it actually filled my imagination with inspiration for the new trilogy I briefly mentioned on Facebook. The very first Assassin’s Creed game my brother played years ago was actually the first inspiration for this story that has been in my mind for years now. ACIII gave me all kinds of new ideas. I hope to work on it after I finish Ilyon Chronicles (which is why I should stop procrastinating and get to working on book 5 *sigh*). 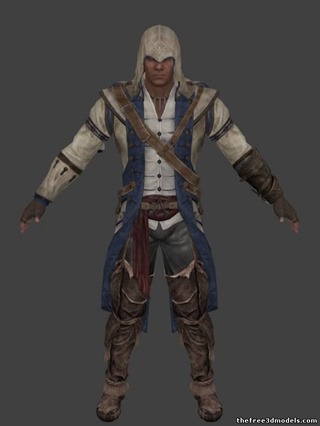 Not only did ACIII provide some excellent story inspiration, but I completely fell in love with the outfit worn by the game’s (totally awesome) protagonist, Connor Kenway, and I’ve decided to recreate it. It has been years since I’ve put together a new costume, and I’m terribly excited about this one. It’s completely different from my usual fantasy costumes. I love the fact that it’s colonial inspired. And since I’ve always had a thing for Native American culture, I love how those aspects are incorporated into the outfit. I’ve got my pattern all printed and put together and all the buttons (about 50 of them!) ordered. Now I just need to get the fabric so I can actually start putting it together. I hope to go shopping sometime this week. This is the first time besides my reenactment clothing that I will really go all-out on a costume. I intend to put it together from head to toe. So we’ll see how it goes. I’ll definitely post some pictures when I finish it. That will probably take a while, but hopefully not too long. It’s really fun to do something creative beyond writing and jewelry. Now if only I had a nearby Comic Con to wear it to once I’m finished. I will end this post with a video because the violin music is awesome and it’s really cool to see another female version of this costume. :)