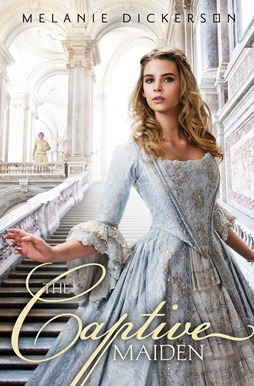 Happily Ever After …Or Happily Nevermore?

Gisela’s childhood was filled with laughter and visits from nobles such as the duke and his young son. But since her father’s death, each day has been filled with nothing but servitude to her stepmother. So when Gisela learns the duke’s son, Valten---the boy she has daydreamed about for years---is throwing a ball in hopes of finding a wife, she vows to find a way to attend, even if it’s only for a taste of a life she’ll never have. To her surprise, she catches Valten’s eye. Though he is rough around the edges, Gisela finds Valten has completely captured her heart. But other forces are bent on keeping the two from falling further in love, putting Gisela in more danger than she ever imagined.

The Captive Maiden is the fourth book of Melanie Dickerson’s fairytale retellings, which I have enjoyed immensely. I particularly loved how three of the four books, including this one, followed members of the same family. It was good to read Valten’s story. As much as I loved Gabe in The Fairest Beauty, I had to feel bad for poor Valten when he lost Sophie. This story totally made up for it.

I thought Valten and Gisela had a very cute love story. I really liked how real Valten seemed, especially in his insecurities when it came to women. It was very endearing to me. His character growth was very good in learning to let go of his pride and let God work instead of trying to do everything himself.

My favorite part of this book was the tournament in the first half. It was very vivid and exciting. I loved the scenes between him and Sophie during it and the feast. It had the perfect fairytale feel.

One of my only complaints about the book was the number of times the characters escaped only to be recaptured. It seemed to happen over and over to the point of being tiresome and a bit unrealistic. Still, it didn’t detract too much from the story. My second complaint might be sort of petty and has nothing to do with the story, but the cover. The model is clearly wearing an 18th century style gown, not 15th century. But then, I’m a costumer/reenactor so I would notice something like that.

While it may not be my favorite of all the books, it was a good continuation, and I really can’t complain about a sweet romance like this. I definitely recommend it and the others to anyone who enjoys a good medieval tale or fairytale retelling.

I received this book free from Booksneeze in exchange for my honest review.